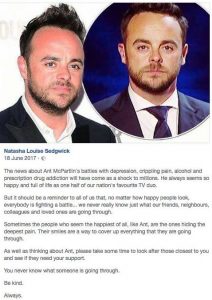 Sometimes those who wear the sunniest smiles are hiding the heaviest of hearts. With news of Ant McPartlin’s arrest for drink driving, his addiction to painkillers, marriage breakdown and his battle with depression, the nation is shock at the contrast between his TV face and reality.

He is not alone, those who work in comedy seem to suffer the most. Whether it’s the pressure of the work they do to constantly entertain and make us laugh or that they struggle more with the mundane, but it has been found that comedians are more prone to depression than other professions. Lest we forget Robin Williams and Tony Hancock; two outstanding comedic actors who were fatally flawed.

As Ant checks into rehab for a second time, I do hope he gets the help and support he needs to beat his addictions and heartache.

Too often just because we can’t see a physical ailment, we forget people who are suffering from depression are ill. It’s as debilitating as any physical illness because your mind is in control of your symptoms and that is far more powerful than any virus. You can’t combat it with a dose of antibiotics and antidepressants have a limited success rate, so how do you cure depression? You manage it and try to get to the root of the reasons behind it. Talking through your problems will help, and having the support from those who care about you is invaluable. Just having someone who understands that you’re going through a really bad time means the world to someone battling depression.

I read this very supportive message below by Natasha Louise Sedgwick on Facebook about Ant and feel we can all take note. Be kinder and compassionate to those who suffer mental illnesses, it’s a frightening journey they are taking.

If you or someone you love is suffering, please seek help.
ChelmsfordCounselling.com
ChelmsfordHypnotherapist.com